Dear NZ, Sweden Wants To Tell You Something

The Sweden branch of Save the Children has set up a site as Scrubone pointed out, called dearnz.com. They claim that "this is what the rest of the world has to say on the anti-smacking law". However not surprisingly, the only alternative translation of the site is Swedish which means that it is in fact Sweden saying this, not "the rest of the world".

Further, it is clear that the site would not have been launched had the Swedish organisers not been confident of a strong yes vote in their poll (currently at 67% yes, 33% no). The most likely scenario is that the site was launched (13 August) with the poll already displaying a majority in favour of the yes vote - and the Swedish organisers will have "justified this" by presuming that all their signed up members would have voted yes anyway. 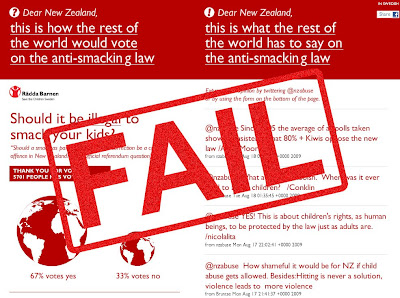 Either way, it's completely irrelevant to the New Zealand situation. Why would a site that has been operational for 5 days have any bearing whatsoever on the outome of the referendum in New Zealand? Polling conducted since 2005 has consistently shown that over 80% of Kiwis know that there is a big difference between child abuse and a smack.
Posted by Andy at 7:56 PM