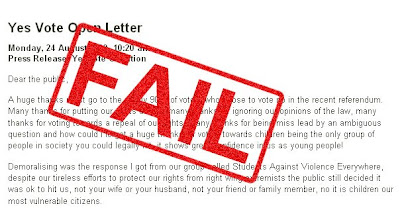 Demoralising was the response I got from our group called Students Against Violence Everywhere, despite our tireless efforts to protect our rights from right wing extremists the public still decided it was ok to hit us, not your wife or your husband, not your friend or family member, no it is children our most vulnerable citizens.

It gives us as young people great confidence in our country to think, that nearly 90% of you believe that we should have a law that says it's ok to hit children.

A true and honest thanks goes to those who vote positively, those who decided not to stand for the rights of children being put at risk, those who votes yes. We must thank you from the bottom of or hearts for having faith in us and believing that we shouldn't be hit.

Many thanks
Johny O'Donnell and the SAVE Team