In 2006 Barnados and Plunket issued a Press Release assuring Parents they would not be criminalised for smacking their children under the new law. They said if Parents were persecuted by Police or CYFS they would be “outraged” and they called upon the Police and CYFS to give assurance that this would not happen. Of course this didn’t happen and now parents are being persecuted. How come Murray Edridge isn’t still “Outraged” ... does he still assure parents they will not be persecuted ? 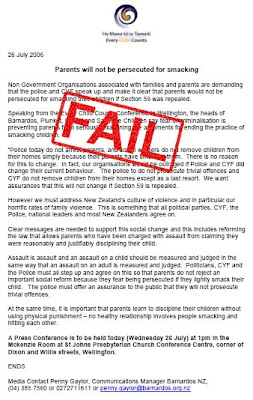 Click here to read the press release.
Posted by Andy at 5:54 PM