The "Yes Vote" website is encouraging people to read this article, in a publication called "The Local, which is an English language news service from Sweden. 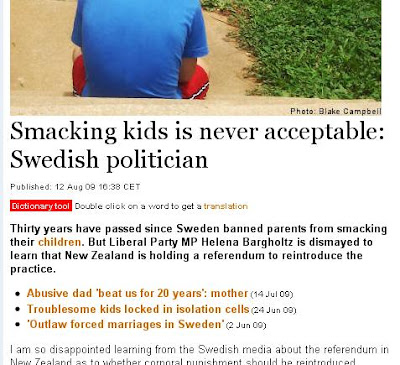 As you can see from the screenshot, the "related headlines" show quote clearly that Sweden has not become some sort of utopian example for us to follow.

In fact, reading the second article, it seems that the state is actually one of the worst perpetrators of child abuse!

In its investigation into the practices at facilities operated by Sweden’s National Board of Institutional Care (SiS), Swedish public radio discovered 463 cases of children being forced to spend time in isolation cells in the last half of 2008.

The cells, which are cramped and devoid of anything other than plastic floor mats, are only supposed to be used in cases when children are so violent or under the influence of controlled substances that no other measures work. Children are usually placed in the cells wearing nothing but underwear and can be held for up to 24 hours.

According to Swedish law, isolation cells are never supposed to be used as a form of punishment for young people.

.......
Lawyers with the Children’s Ombudsman who reviewed the files concluded that staff members followed the letter of the law in only a small percentage of the cases.

“When taking into consideration how widespread it is, I think it’s fair to view this as a judicial scandal,” Malmberg told SR.

“What is supposed to be an exceptional measure has been used with great frequency and children have been isolated in violation of the law; it’s been used as a way to punish the children.”

So get that: the same country that tells us that physical punishment is evil, is stripping children to their underwear and placing them in solitary confinement.

MP Helena Bargholtz is forced to admit that child abuse (in terms of cases reported) is actually worse. She then hastily attempts to spin away the facts.

During the last two decades, reporting of child abuse and neglect has increased. There is no clear evidence indicating a corresponding increase in actual cases of child abuse in Sweden. Everything points to other explanations such as better awareness and knowledge of children in vulnerable situations. As mentioned above, attitudes in society have also changed: people today are less willing to accept violence against children. Another reason is that the reporting obligations under the Social Welfare Act have been strengthened and many more groups of professionals are now obliged to report children at risk - so fewer cases of child abuse and neglect fail to come to the attention of the social welfare authorities.

In other countries, where corporal punishment is not prohibited, for example the USA and Canada, the number of reports of child abuse and neglect has also increased. In Belgium, the numbers have increased by almost 70 per cent between 1986 and 1992.

The State's obligation under the Convention on the Rights of the Child demands that all measures must be undertaken for the implementation of the rights recognized in the Convention. Legislation is only one of the measures, but it is an important statement from society that we are no longer accepting physical chastisement of children.

Except that the UN Convention on the Rights of the Child makes no such obligation. This is especially evident by the large number of countries that signed it who have not, and have no intention to ever ban smacking. This so called "obligation" is read into the Convention by those who want it to be there.

When the Bill on the anti-spanking law was put forward a member of the Swedish Parliament said: "If we as parents cannot convince our children with words, then we shall never convince them with violence."

You can bet your *** that she never anticipated that sentence ending: "But failing that, we'll just strip them and throw them into solitary." Sweden's Experience? - FAIL

P.S. Read the comments on the articles, there are some interesting ones.

Update: Corrected some spelling and grammar.