The Yes Vote campaign distributed this briefing sheet about the upcoming referendum on smacking.
Its like a tub of Hokey Pokey Ice cream, Full of great fails but every now and then there are some nice crunchy ones.
Lets just keep to the crunchy ones.
Fail # 1 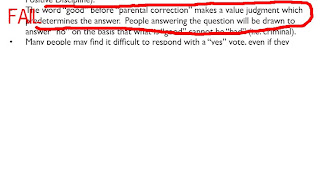 The first fail is where the briefing document says that the word good before "parental correction" in the referendum is misleading as it makes smacking seem necessary to good parental correction.
However this is hypocritical as the law which they claim is 'working' says that parents can use reasonable force in tasks that are associated with "good care and parenting". Before they start slamming the referendum, they can first explain their great law to me.

The second hokey pokey I came accross was this one. The yes vote campaign is complaining that there has been no government led campaign to inform the public of the new law.

While that is partly true, I would first like to know where the Yes Vote campaign supporters get a lot of their money from? It was the government last time I looked.
Fail #3. Here they complain that people find it difficult to vote 'yes' in the referendum as it means they are incriminating good parents.

Whats wrong with the truth?
Hokey #4: The document lists a number of reasons why the previous law needed reforming.

Here they claim that firstly 'positive non-violent discipline works'. The free dictionary says that discipline is, "Punishment intended to correct or train." Even if it works, it is illegal. The new S59 says that all force for the purpose of correction is illegal.
Fail #5 : Here the yes vote claim that the new law puts children on the same legal basis as adults.

Before I swallow that Hokey Pokey , could you please explain why I can force my child to eat his/her greens, but I can't force my Dad?
Fail # 6 : The Yes vote folk next tell me some of the key findings of a survey which was conducted by UMR paid for by the childrens commission. (Yes the same polling company as the Labour party).

The results which they present try to paint the picture that we don't support the use of physical discipline. Well before I believe that one, I would like to see the questions they asked.
Hokey Pokey # 7 : Here we are presented with some statistics from young people. They were asked whether they had seen an adult hit or physically hurt a child in their home within the past 12 months.

Firstly a smack is not a hit. Secondly when you ask stupid things, you get stupid answers.
Fail #8 : The yes vote team finally bring to light the truth. They say regarding child deaths from abuse "child deaths represent the extreme end of the
child abuse spectrum, and usually involve complex factors like drug and alcohol abuse and
intergenerational violence"

Here I have to congratulate the yes vote team. Well done. Aren't these the factors of child abuse that we should be targeting? NOT good parents trying to raise good citizens.
Fail #9 : Here they try and say that physical punishment hurts everything that a child is. Its relationship with parents, its safety, security etc.

That is purely oppinion. Give me some evidence and I might try chewing that one.
Final Fail # 10 ! :Here we are presented with the summary of the document.

The first point is that the law is working well they say. I don't think you can get any further from the truth. The law was passed to stop child abuse. That has not happened. That should be the test of whether the law is working.
Secondly Parents are being prosecuted.
The law does not support positive parenting. It supports violent outbursts on your child.
The law does not increase a childs protection. It diminishes it.
The referendum is necessary as the politicians continue to ignore the public
A yes vote supports criminalising all good parents who choose to use a smack for the purpose of correction.
Posted by Money's at 6:33 PM